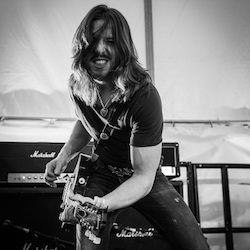 George is no stranger to the stage! After starting to playing guitar in his early teens, he was soon practising in every spare moment he could.
At age 17, after turning up at a local jam night and performing, he was asked to join a well-known rock covers band, starting his love affair with performing live.

George’s current main performing passions are spent with his original band ‘Crooked Shapes’. In his previous original band ‘Freeway Mad’ he also gigged up and down the country, and in the USA to play Rocklahoma Festival, sharing the bill with acts such as the Megadeth, Rob Zombie and The Scorpions.

In 2014 he graduated from ACM Guilford with a BMus (Hons) Degree in Professional Music Performance. He is also a very experienced studio musician, and a working producer, writing and recording music for various TV and film production companies.

George hopes to spread his love of the guitar, music, and live performance with the next generation.