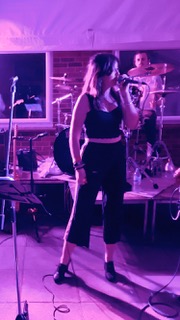 Sophie’s love for singing began when she was 10 after joining a community based youth choir. During her time in choirs she performed at venues including Guildford Cathedral, Eton College and the O2 Arena. Her choral career also allowed her to perform alongside Ellie Goulding for WE Day UK at London’s Wembley Arena and sing in the choir for the 2014 BBC Proms performance of Benjamin Britten’s ‘War Requiem’ at The Royal Albert Hall. Sophie has been a choral director from the age of 15 and set up her own adult choir, Belle Voci in 2015.

Sophie is a Grade 8 ABRSM certified singer, who graduated from the Institute of Contemporary Music Performance, London with a BMus (Hons) Contemporary Music Degree in 2016 where she specialised in Vocal Studies. She went on to train as a secondary school music teacher and is now a primary school teacher by day.

Sophie regularly performs with her covers band The Covers Collective and when she’s not teaching or performing, enjoys cooking and travelling.