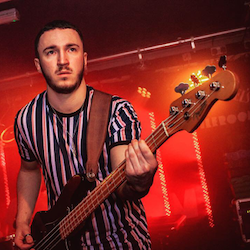 Sam graduated from ACM in 2018 after studying a BMus(Hons) Music degree specialising in bass. He studied under the tuition of Sandy Beales (One Direction, JP Cooper), Andrew Small (Kylie Minogue, Massive Attack); and has been lucky enough to study privately with Paul Geary (Nik Kershaw, George Michael) for 7 years.

Sam has experience working in musical theatre, playing in many shows including Evita, Grease and The Witches of Eastwick, in venues such as the Haymarket and the Anvil in Basingstoke. Sam is playing in four shows this year (2019); Legally Blonde (Birmingham), Made In Dagenham (Basingstoke), Sister Act (Andover) and Little Shop of Horrors (Basingstoke).

Alongside his theatre work, Sam is also working with London based artist ‘Nearly T’, who he performed with on BBC Introducing’s Live Lounge on BBC Sussex and South radio. Sam has also performed at venues such as the o2 academy Islington, Cargo and Borderline. Sam was also a member of the ACM House Band – a professional band made up of ACM’s top students in the last year of their degree.