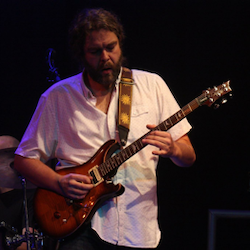 A late bloomer in music, Martin picked up the guitar way back in the early 90’s at the age of 17. Within months he was playing and gigging in blues, rock and grunge bands in Canada. He then moved to the UK several years later and has been here ever since. Having become involved in a much bigger scene than back in Canada he soon found a love for classic soul and funk music and has since released an album of original material, Green Light by Martin Gordon, available on most digital platforms.

Some of the musicians Gordon has played with are Sam Kelly (legendary funk drummer from Cymande and current UK blues ace), John Gallen (Queen engineer), Tony Turrell (Keys and songwriter for Fish) and many more. Currently Martin is in Britain’s finest Collin’s era Genesis tribute act called Genesis: Visible Touch in which he plays guitar, bass and Taurus pedals. Sometimes all in the same song! He also continues to gig and write his own material as well as playing in musicals and acting.

As an multi-instrumentalist, songwriter and producer Martin has been called on to wear many hats both in the studio and on stage. He has been teaching for well over 20 years and has worked in colleges, schools and universities. He not only graduated from ACM in Guildford, with a degree in music production, but also taught there for 7 years after. He continues to teach guitar, bass, vocals, song writing and production privately as well as group workshops at multiple schools.