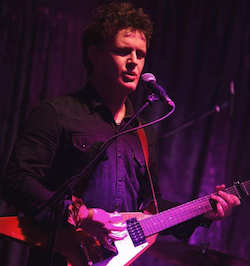 Since picking up the guitar at the age of seven and listening to a ripping Steve Vai solo, nothing has ever swayed Jay from not wanting to be a professional guitar player.

After graduating from The Academy of Contemporary Music with a BA Hons in Professional Music Performance (2017) and studying under some of the most highly regarded musicians and tutors worldwide, Jay has become a sought after guitar player for both live performances and studio sessions, for both bands and solo artists.

Having played at notable venues such as Ronnie Scotts Jazz Club in Soho, London and shows such as Camden Rocks Festival, Jay is capable of applying himself to play most music genres.

Jay’s most recent work outside of teaching for The Rock Project is playing on musical theatre shows.