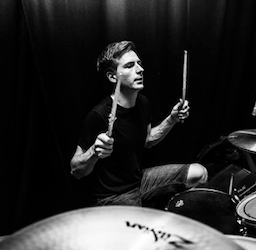 Jack’s passion for drumming began in a basement in the year 2000. After playing a friends drum kit for the first time, he quickly realised that this was something much more than just a fun way to pass the time with a mate. He took up lessons with local tutor, Hamish Stewart, and studied rock, pop, jazz, funk, soul, samba and afro cuban drumming. After performing regularly with the samba band Hamish lead, he then formed his first band and started his long musical journey that has taken him on many UK and European tours and to stages at 2000 Trees festival, Reading and Leeds, Ieper Hardcore Fest and Edinburgh Fringe Festival. Jack studied music at Thames Valley University and passed with the triple award of Distinction, Distinction, Merit. He then went on to study jazz drumming with the late drumming legend, Bob Armstrong, at his studio in Essex. Jack has been teaching professionally since 2012, enabling all of his exam students to obtain no less than Merits and Distinctions. Jack has a huge passion for inspiring, encouraging and educating the future generation of drummers and believes that with hard work, persistence and perseverance, every drummer can achieve their goals.