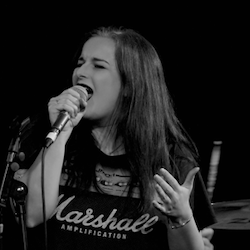 Deanna has been singing and performing live for 10 years; and studied vocal performance at the Academy of Contemporary Music to strengthen her skillset and knowledge.
Her first major performance was in 2014 at the Royal Albert Hall, performing ‘Carmina Burana’ with a full Choir and Orchestra, conducted by renowned Conductor Ben Parry.
Since this performance, she continued to strengthen her performance skills, playing in various bands and showcases hosted by the Academy of Contemporary Music.

During her time at the Academy of Contemporary Music, she discovered a passion for Vocal Pedagogy and has since acquired rich knowledge through attending regular vocal seminars, led by some of the best Vocal Coaches and Vocal Doctors in the world; Joshua Alamu, Doctor Reena Gupta and Doctor Ingo Titze to name a couple.

As well as applying her knowledge of vocals to teach with the Rock Project, she is currently gigging with “The Average Funk Band”, where her rich timbre of voice perfectly matches their setlist of classic funk and soul.