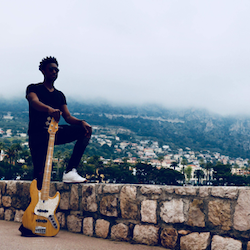 Caleb Wilson is a UK based freelance musician, graduating with First Class Honours from The Academy of Contemporary Music with a BMus(hons) degree in Professional Music Performance in 2017 at 19 years old.

He plays bass for SHOR (check out “calm of the sea” on Spotify), he is an ambassador for ACM and was resident bassist for the ACM House Band.
He is currently working with Children’s TV megastar Justin Fletcher, resident bassist for TV series YolanDa’s Band Jam and has appeared on Cbeebies, BBC1 and the West End.

He was also involved on screen and in the recording of Idris Elba’s film (Yardie), along with recording for producer and keys player Brian Henry (Soul II Soul, Omar) for Incognito’s Chris Ballin.