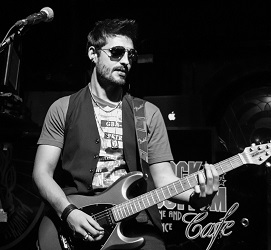 Having had a nationwide release in 2008 at the age of 18 with his album ‘Valour’, which also featured in Kerrang Magazine , it is clear that Chris has been a dedicated musician right from the start. He then graduated from the Academy of Contemporary Music in 2012 with a BA(Hons) in Professional Music Performance.

Since then he has played with top quality musicians all over the world and spent most of his time performing in house bands in luxury hotels all over the United Arab Emirates.

It’s fair to say that Chris has a vast amount of performing experience and a huge repertoire spanning over a wide variety of genres. Now, back in the UK, his concentration has moved to teaching and sharing his knowledge with the up and coming musicians of the new generation.